How does our view of the world, everyday life, the people and situations we encounter, change when the connections that link these things together are lost?

More and more patients and relatives are forced to deal with the disease of dementia. The fear of “becoming forgetful” is great. Thus, it is often kept hidden at first, or simply dismissed as nothing more than “being a bit scatterbrained”. However, as the signs become ever clearer, the dementia can no longer be ignored. 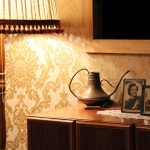 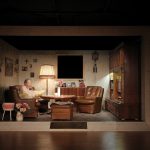 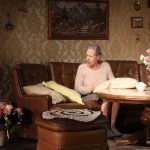 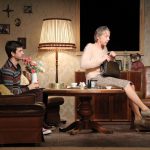 The play is inspired by the BR documentary “Der Tag, der in der Handtasche verschwand” which features text fragments from both the old lady´s stories and the observer´s questions and expressions of incomprehension. Dialogue is interchanged with elements of dance, the latter serving as a visual complement to the documentary text.

The characters include an elderly lady suffering from dementia, a young man and three dancers. The young man, who accompanies the lady throughout the play, is part of the audience. He is an acquaintance, family member and director of the evening at the same time and guides the events with his well-placed questions. Just like the members of the audience, he holds a position of voyeurism towards the old lady, while at the same time serving as her conversational partner.

Dance and music serve as additional inputs to visualize the inner life of the lady as well as her view of her surroundings. Which fears plague her? Why does she not know what is happening? The strange powers and bodies have an ever stronger effect on her and are perceived as a threat. This impression becomes even stronger since the dancers are obviously not seen by the young man – her only connection to the world outside.